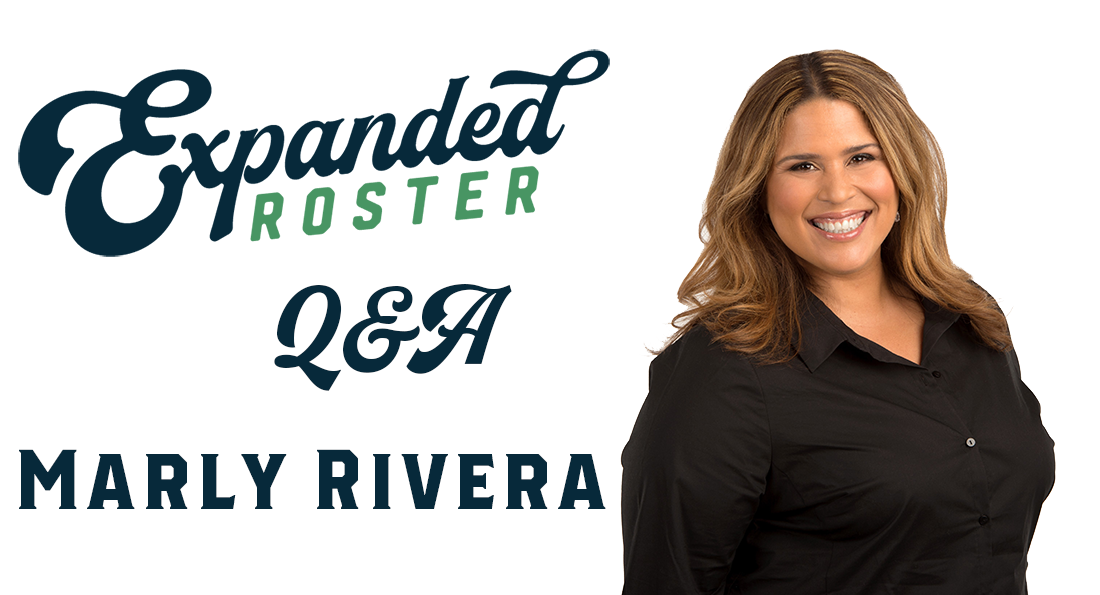 Posted at 10:00h in Interviews by Expanded Roster
0 Likes
Share

Marly Rivera has been in the baseball biz for almost 20 years. In her role as a national baseball writer at ESPN, she’s seen how the industry has evolved when it comes to minority representation among baseball journalists. Expanded Roster spoke to her about what has changed, and what hasn’t. Here is a condensed version of that conversation.

Expanded Roster: You have been in baseball for a long time. What are you seeing out there when it comes to diversity, generally?
Marly Rivera: I’ll say that in the last decade I have seen greater representation for both women and men of color. There are certain groups that continue to be really, really underrepresented, especially African Americans and Asians, especially Asian Americans. There’s quite a few, especially Japanese reporters, who follow certain players. But Asian Americans are extremely underrepresented. Hispanics have seen a little bit of growth. It’s not great, and on the bilingual landscape it’s still very, very limited. There’s only three of us for women, and there are just a few men who do it.

ER: Earlier this year, you tweeted about the Red Sox going to the White House that you wished more journalists of color were were covering the team on a regular basis.
MR: There were none. The Red Sox beat, now they have one black man. The Red Sox beat had zero minority representation.

ER: So what do you think was lacking there?
MR: Well I think it’s difficult. You know, we are all human. We can speak about the human experience, and journalists can speak about it too, they don’t have to go through an experience to talk about it. But when it comes to issues of race, it can be a little tricky to speak about those issues when you have never experienced them. And that’s kind of what I meant. It doesn’t mean that a white person or a Caucasian person cannot speak eloquently about racism or a racial issue. But the experiential factor changes things and changes the way that you approach things. If you’re a black person or a minority person, especially if you’re writing columns or opinion, it’s entirely different because it comes from experience. I feel that something gets lost when you don’t have minority representation addressing minority issues. We are uniquely equipped to address them because we live them on an everyday basis.

ER: After you tweeted that out, you got trolled. How do you deal with that?
MR: Oh, I’m so used to it. It doesn’t bother me. Well, that’s not true. I don’t let it fester. That’s how I cope. It’s almost like you just you get numb to those kind of comments. Every other day, I get a “Speak English” or “Go back to where you came from” or “English is the language of this country” or they misinterpret what I’m saying — those are the ones that actually piss me off the most. It kind of works as a double-edged sword because sometimes people will say very nice things to me about my work and I don’t read it.

ER: What do you think should be done about broadcasters who kind of engage with and perpetuate stereotypes and tropes — people saying, like, so-and-so must be lying about his age because of where he’s from or like remarks about people’s English-language skills?
I think every individual person would have their own ruling on that one, and I don’t think that MLB needs to get involved. I think what we need to do is to keep educating people. Plenty of people, who I actually really like, I’ve heard them say some callous and insensitive comments about people of color or Latinos who don’t speak English. What you do is you educate. You stay out there, you beat your drum and you educate people about it. I had a very close relationship with Ichiro Suzuki. Ichiro spoke perfect English, but the moment you wanted to do an interview, you needed to get the translator. And I was always very confused. I’d be like Ichiro, why? And he goes, “because Marly, I want to be able to express my thoughts the way I want to express them, and I think that you want to hear exactly what I want to say. And the way I can say it the best is in Japanese.” That floored me. I was like, you’re right.

There are going to be trolls and racists all the time, and we let those people we can’t reach. But there are people who don’t understand why the translators are in the clubhouse, who don’t understand why [Latino] kids don’t speak English in a more proficient way. If we educate that group of people, who I would like to believe is the majority, then I think we can address those issues.

ER: Is education, then, the overarching thing here in terms of like how we move forward, how we do better?
MR:Yes. It’s a catch 22. How do we educate people on these issues? We have more journalists of color telling them about them, right? So it just goes back and forth. Unfortunately, there are so few of us telling those stories.

ER: How do we convince the powers that be that this matters?
MR: There’s nothing we can do except beat the drum. We tell these stories, and we hope that people listen. And when we are put in situations that — like the situation that I was put in, in the Home Run Derby. [Ed’s note: Marly interviewed players in both English and Spanish during the broadcast]. Norby Williamson, the V.P. of production for ESPN, believed I was necessary on that broadcast not only because of my relationship with Vladdy [Guerrero] and my relationship with Ronald Acuña Jr., or because I speak Spanish perfectly and English OK (laughs), but also because that my experience would help the broadcast. And I did it to the best of my ability. So I think that’s also important, when you get these opportunities, which are few and far between, you have to use that platform correctly and show people why it’s necessary. I prepared for 15, 18 years for that moment at the Home Run Derby, to show people why it’s important to have the background that I have.