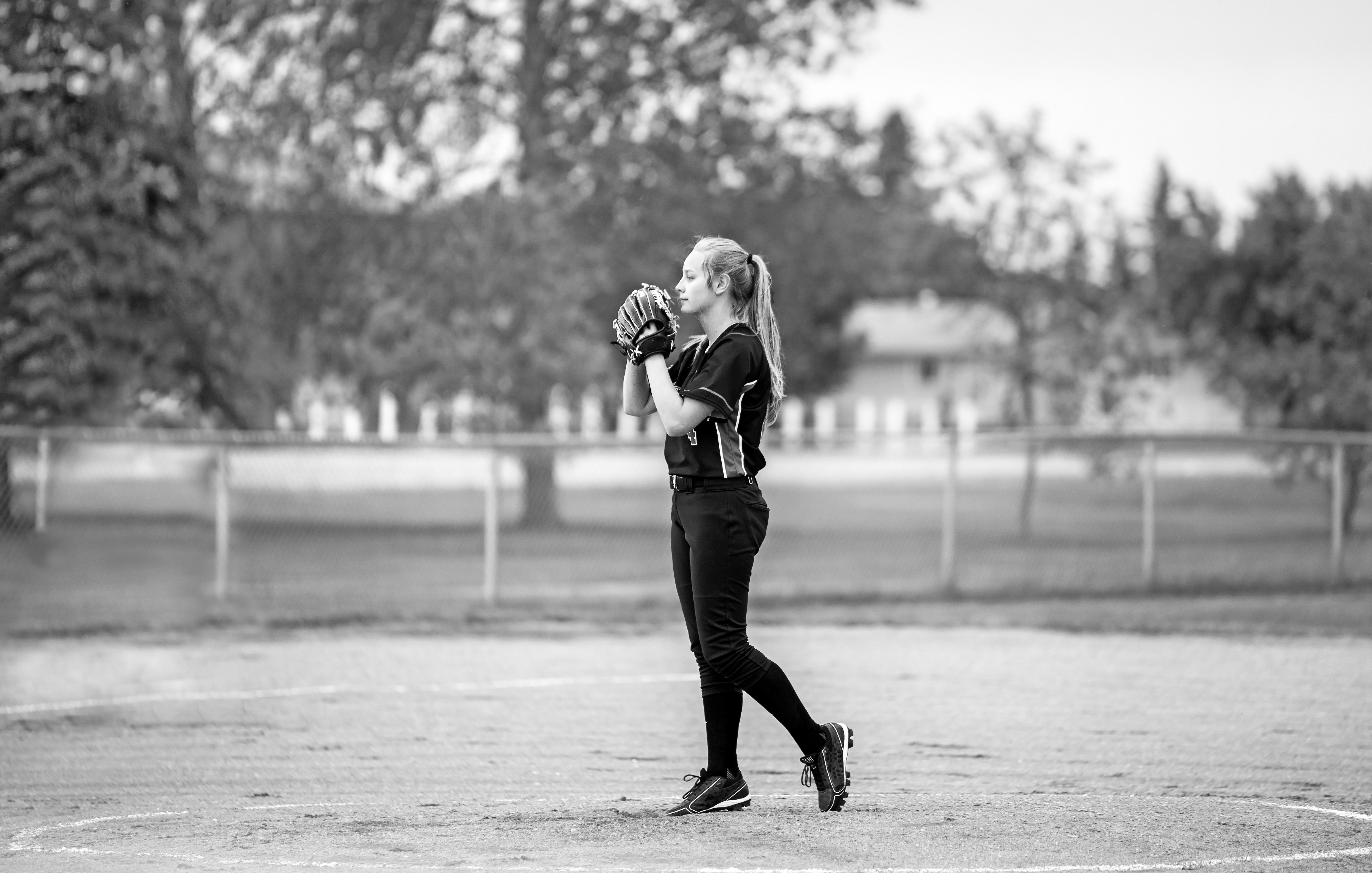 18 Apr What Baseball Accidentally Taught Me about Gender

“I’m not a tomboy, I’m an athlete.” The phrase was printed in white letters on a light-blue long-sleeve T-shirt. Between the first and second halves of the phrase were a soccer ball, a basketball, and a baseball (or was it a softball?). I was about 9, at the mall with my mom, when I saw the shirt in Olympia Sports.

That was the most decisive I have ever been about buying a piece of clothing. A few minutes later, my mom got the shirt. I had worn many a graphic tee before, but something about this one, I thought, was just right. Maybe that something was that there was a loose-fitting piece of clothing marketed to a girl who played sports, and it wasn’t pink. This shirt was made for me.

But sometime between the shopping trip and the first time I wore the shirt, my certainty faded. Something about it wasn’t quite right. I tried to wear it occasionally, mostly out of guilt. I hoped the feeling of “wrongness” was a fluke, that I might regain the sense of identification I had felt at the store. It didn’t work. It didn’t feel like the emblem of “me-ness” I had thought it was. I knew the sentiment I wanted the shirt to express. But something about its phrasing nagged at me.

There were two types of people, I imagined, who could wear this shirt. The first excels at sports and loves them, and plays with Barbies and wears dresses. “Yes, I’m good at sports and I love them. But I am NOT a tomboy,” they yell defiantly. The second doesn’t like to dress the way girls are supposed to dress, and doesn’t like to do the things girls are supposed to like to do. And they too play sports skillfully. A classmate refers to them as a tomboy and they say, “I’m not a tomboy, I’m better than a tomboy. I’m an athlete.” There was nothing wrong with these two people, but I couldn’t picture myself as either of them.

When I consider the shirt semantically, “tomboy” and “athlete” seem to suggest that the two personas should not coexist. What did the first part of the phrase accomplish? Couldn’t the shirt just have read, “I’m an athlete”? I guess what I really needed at the time was that same style of shirt with the phrase “I think I’m a tomboy and also an athlete and am proud to be both, although I’m not completely sure what a tomboy is and what part of me it describes, and also being a girl is a big part of who I am, I love being a girl and, gender and sexuality, though separate concepts, are intimately related, so by the way I’m super bi, although I won’t figure that out for a while.” But I guess finding a shirt with that amount of nuance was unlikely.

The trope “girl disguises herself as boy and then, big reveal, girl is girl,” is ancient. At 9, my reference point for this story was Tamora Pierce’s Alanna series. In the novels, the young noblewoman disguises herself as a boy so she can train to be a knight. Along the way to successfully becoming a badass knight, her peers are shocked to learn that she’s a girl. In my most grandiose dreams, I hoped to one day become the Alanna of Major League Baseball. (I didn’t know to dream of becoming a player in a women’s professional league; I didn’t know that existed.)

Though this dream itself was a pleasant one, it also demonstrates that my relationship with baseball, as a player and a fan, has always been simultaneously joyous and defiant. Baseball instilled in me anger, resentment, and shame about gender. While I was learning how to crow-hop, I was also learning that gender was binary and immovable, that there was only one way to be a girl, that girls could not do what boys could. I could never simply love baseball, I had to love baseball while defying its implications.

I would guess that boys probably also picture themselves defying expectations to become MLB players, á la Dustin Pedroia. Partly, this was the story I imagined. In one part of the fantasy, I dreamt of my individual talent and triumph, of the baseball prowess that had propelled me to the majors. But fundamental to this fantasy was the big reveal, the moment when, as we stood in the dugout watching someone else’s at-bat, my teammates realized I was a girl. In this second part, my success wasn’t the main event; it was the reveal, the realization, the moment, the “We were right and you were wrong,” of forever changing the way they thought about women and girls’ relationship with baseball.

Maybe I didn’t even want to be the Alanna of baseball. Maybe I wanted to be free to dream of becoming the next Tim Wakefield–esque knuckleballer for the Red Sox. To imagine a world where that was possible, I had to also yearn for Alanna to do for baseball what she had done for knighthood.

Middle school is an angsty time for most young folks. I’m not sure how common baseball angst is for middle schoolers, but I had it. At some point during this phase, I realized I was a mediocre player. When I saw that my throws to first could be wild and that I would continue to strike out over and over again, I was angry. I had yelled to the world, “Hey! I know girls can play baseball. Don’t believe me? I’ll show you myself!” And the world, smiling sweetly as I struck out again said, “Aw, good try, honey!” With that, my time playing baseball ended. Seventh grade at my all-girls school was the first year we could join sports teams. So when spring rolled around, it was time to play softball.

My team had some very experienced players, more skilled than I was. But most of the girls, it seemed, hadn’t played before. I made it clear that I knew how to play not because I had ever deigned to play softball before, but because I used to play baseball. As a competent fielder among people who couldn’t yet catch a pop fly, I would try to keep my face impassive as I returned the ball to the infield, quietly enjoying my reign as one of the best. And I was mad. I was mad at my teammates for not knowing how to play. I was mad at myself for thinking of them, “You throw like a girl.”

Secretly, I was mad mostly because there were girls on my team who still played baseball on their towns’ teams, which meant that my switching from baseball to softball wasn’t inevitable. It was no one’s fault but my own, a sign that I had given up, that I had failed. There were those who were good enough to fight against the “boys play baseball; girls play softball” standard, and, I realized with regret and shame, I was not one of them. I was now somehow a participant in the standard they were fighting, just another unwilling tally in the “see, girls do just play softball” column.

Despite my ongoing angst, I mostly liked softball and kept playing through high school, even if I stubbornly continued to throw a softball using a baseball two-seam grip, claiming I couldn’t get used to a full palm grip, an insistence that probably came at the price of power and accuracy. I wondered why I played softball and why softball couldn’t just be baseball.
~~

Baseball didn’t mean to teach me what I know about gender and feminism. It taught me by excluding, by exerting rigidity, by instilling resentment. But what would it look like to learn about gender from baseball not defiantly, but cooperatively?

The “boys play baseball; girls play softball” rule suggested a world of strict binary. But baseball itself is a sport that defies binary. As important as the distinction is between a ball and a strike, the difference is generated through nuance and perspective—the positioning of the pitcher’s finger on the ball, a tiny variation in release point, the framing by a catcher—and sometimes by an umpire’s arbitrary choice.

I thought that I had to be either a tomboy or an athlete and was uncomfortable when I realized I wasn’t sure which one I was. Baseball could have been the solution to this discomfort. It could have helped me discover the ways I could choose to present myself as a woman. Because what sport other than baseball tells such a sprawling story about the significance of clothing? Think of the variety of sock heights, the meaning of wearing a dirty helmet versus a polished helmet, the multiplicity of necklaces, the dramatic controversies over cleat and glove colors, and the variations in hairstyles that reflect and create team culture.

I know, not everything has to teach you about life and gender. “Just try to enjoy baseball for what it is, don’t make it into a lesson!” a man sitting behind me at Fenway might reply. But that’s the thing. When I started playing and watching baseball, I wasn’t trying to learn about gender, and baseball wasn’t overtly trying to teach me. But even so, it did. And what it taught me wasn’t kind.