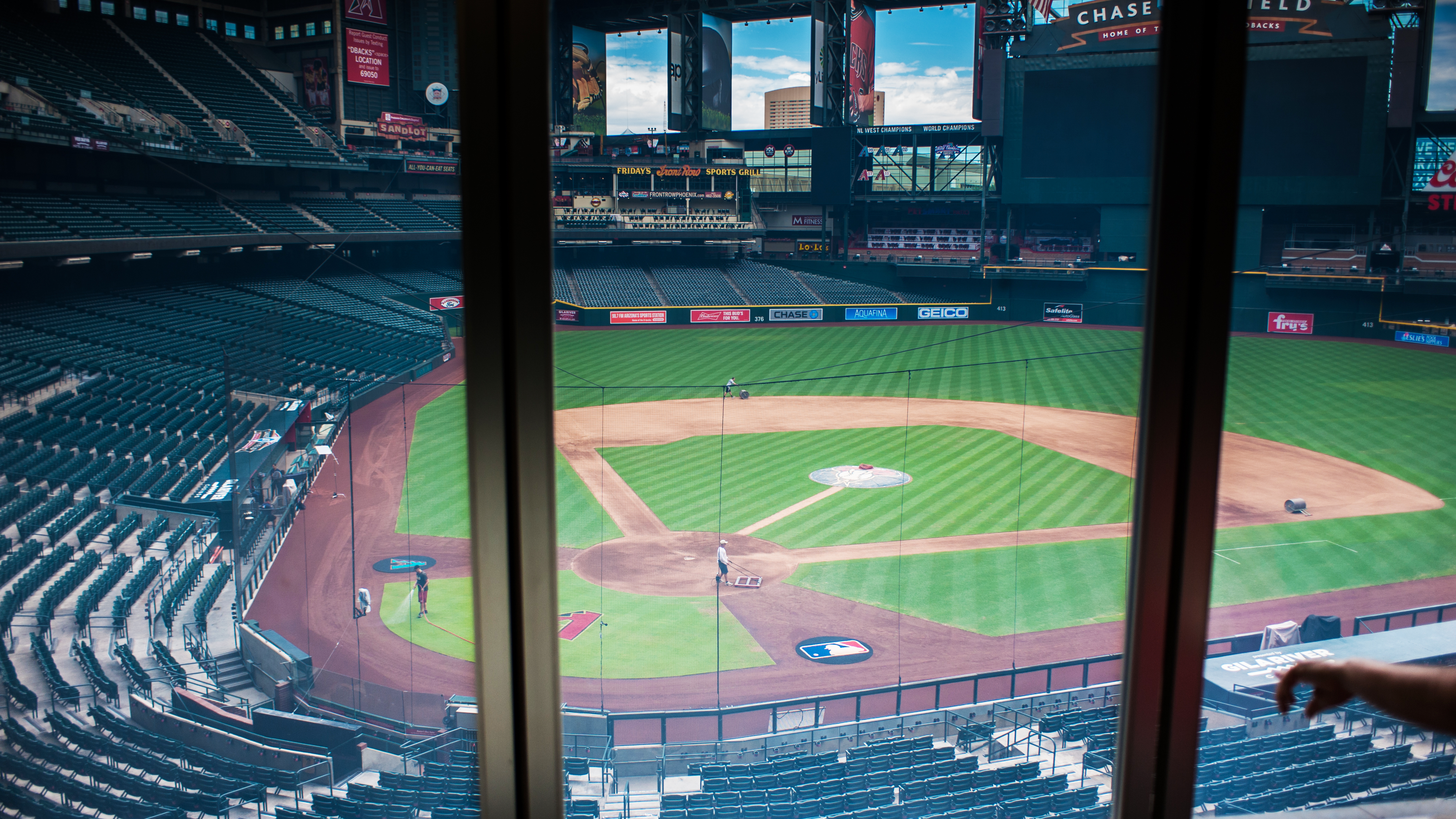 Posted at 19:14h in Features by Expanded Roster
2 Likes
Share

If you’re a worker in America who is passionate about their work and feel that it provides real value to society, you’re in a shrinking minority. The labor market has undergone massive shifts in recent years, and the space for noble work in journalism, caring labor, entertainment, and other areas has gradually been replaced by pointless busywork and the blossoming gig economy. The most abundant employment is now commonly referred to as a “side hustle,” and I know all of this from personal experience.

I left my job as a Human Resources Representative in July 2016 to pursue writing full-time. I had saved some money and knew I could make it as a freelancer for a bit while I continued to hone my skills and searched for something full-time. There was also the benefit of having a spouse with a decent job, but that’s just a footnote in the story. The point is, it was a leap of faith sparked by my love of baseball and my personal drive and motivation. Within a few months, I was offered a full-time position with a pop culture website called the Cheat Sheet. To my shock, even in late 2016 it was possible to land a job in the industry with a decent salary and benefits.

Even better for me was that writing for the Cheat Sheet allowed me to continue my freelance work, which eventually included bylines in a local newspaper, Forbes, The Athletic, and the Sporting News. But over the course of the next 18 months, I watched the Cheat Sheet struggle with the competition, gradually asking more and more of their writers and going through “restructuring” periods which saw varying amounts of staffers being laid off to cut costs.

The company’s focus zeroed in on click-bait content for Baby Boomers, which meant a lot of puff pieces about the Trump family, a lot of 1 Reason Why You Need To Be Scared About This Shocking Thing, and somewhat surprisingly, a lot of Hollywood-style gossip about the Kardashians and Meghan Markle. The site I was once proud to write for was quickly turning into a content mill with no real direction and no idea how to survive in the long-term.

It’s not as though the people who run the site are blameless, but looking back, a big part of the problem were the livable wages and benefits they offered. Altruistic, yes. And many – including myself – would offer the theory that it’s right and good for a company to compensate employees well, even if their competitors refuse to do so. But no doubt, with other sites pivoting to video and letting go of full-time staff in favor of freelancers, interns, and just outright unpaid labor, the Cheat Sheet was operating at a major disadvantage from the get-go.

I was part of a massive round of layoffs in June 2018, and after seven months unemployed the decision staring me in my face was an obvious one. The time for chasing my passion, sadly, was gone. The economy no longer offers a clear path to living wages in the journalism industry, among the others that have been mentioned.

In addition to several years of work in food service, retail, management, government, and HR, I also have a BS in Labor Studies and Employment Relations. And from what I have read in books and seen with my own two eyes, it has become painfully obvious that pursuing a passion or a career that provides both a good salary and positive value for your community is no longer feasible for most people.

This is where I have to put out caveats and acknowledge that people do end up making a living long-term in jobs that bring them true joy. My wife loves her work as an educator, I have friends who freelance for a living and do extremely well, and there are other examples of people in journalism with good, full-time jobs. Even if it’s not traveling from city to city as a beat writer following the Chicago Cubs, you could also count my ambitions in labor relations in this category. But every example that comes to mind involves some form of privilege, whether it be financial support from parents or a spouse, a strong union, or having risen through the ranks at a time when the industry was very different.

Want to be a sports journalist today? Here is what you’re in for. As recent as 2018, a prominent name in sports journalism offered to pay freelance writers $37.50 per story. This often would require a day or two at the ballpark, speaking to players and other personnel to gather quotes. In total, you might spend anywhere from five to 15 hours working to earn that $37.50.

If your ambition is radio, a major podcast network is known for being willing to bring on lesser-known people in the industry. This helps spread name recognition for those desperately trying to build their brand. But you better have money to invest in a laptop and a quality microphone, and you’ll be asked to put out content on a nearly daily basis. You also need to accept early on, as many are told, that you won’t really be making much money. Actually, you probably won’t make any money at all for a few months while you build your listener base.

These are the current realities of the sports journalism industry, and it’s only going to get worse. As much as I admire the effort of sites like The Athletic and their subscription model, which attempts to revive the lifeless corpse of old school, newspaper-style sports writing, there’s no evidence to date that it’s going to be sustainable in the long-run.

In fact, artificial intelligence has advanced enough that it can already write short fantasy sports recaps with at least the same level of quality of an underpaid, recent college grad. I fear that it won’t be long before new technology finds ways to push out the remaining full-time writers, leaving gaggles of freelancers to trample each other in pursuit of some coveted opportunity to write a $37.50 opinion piece.

It’s not just journalism. Manufacturing is an industry that has lost millions of jobs to advancements in technology in recent years, and those jobs aren’t coming back no matter what a lunatic with a bad combover wants to tell you. In the next 10-to-20 years, more jobs in other industries will disappear. Toyota is investing $500 million in Uber’s attempt to perfect driverless cars, and Uber is already testing them in a handful of states. Driverless trucks, if perfected, will put thousands of truck drivers out of work, and the majority of them will be over 50. That means people who are more likely to just eventually give up looking for work, like so many who lost their manufacturing jobs.

In theory, advancement in technology should be a good thing for society as a whole. Economist John Maynard Keynes predicted nearly 90 years ago that by now we could be working 15 hours per week on average. He probably was a bit too optimistic, but not as far off as you might think. There is no doubt that, at some point in the last few decades, we veered away from using technology to make life better for everyone. Instead, we’ve used it to further enrich the super-wealthy, suppress wages, and create pointless jobs with negative societal value. These are called “bullshit jobs” according to anthropologist David Graeber, the author of Bullshit Jobs: A Theory.

According to Graeber’s definition of bullshit jobs, corporate lawyers are the absolute most bullshit of jobs, and many struggle internally with that bullshitiness. Several times in the book, he jokes that society as a whole wouldn’t really miss a beat if we woke up tomorrow to discover that the job of corporate lawyer had been eliminated. Many of these jobs, too, will likely be automated away in the coming years.

Many bullshit jobs reside in the white collar industries, where workers mostly believe they’re safe from technological advancement. The big, bad robots won’t be coming for our jobs, they think. This is both arrogant and wrong, but that’s beside the point. While many in white collar jobs such as finance and administrative work feel that they work hard and are paid well, they privately struggle with a variety of emotions relating to their jobs. These people feel that the work they do is either completely pointless, harmful to society, or both.

Again, not everybody under the age of 40 hates the work they do and believes it to be utterly inconsequential. If you are reading this and can’t relate to the struggle of the freelancer who spends most of their day firing off emails titled “Just Checking in Again…”, or the Uber drivers, call center employees, white collar workers, and those that are riding out the clock until their jobs are automated away, then congratulations. You’re doing great.

But if the biggest aspect of the problem is that jobs are just going to keep disappearing, what is the solution? Outside of digging into policy ideas such as universal basic income, which Graeber talks about in his book and which is the major platform of fringe Democratic presidential candidate Andrew Yang, I don’t have the answer just yet. What I can tell you, however, is that my time floundering in baseball writing while searching for the intersection of passion, real world value, and living wages is officially over. Don’t worry, I’ll be okay.

As a society, all we can do right now is to educate ourselves. We need to be aware of the rising tide in automation and what it might do to the labor market in the coming years. We’ve already allowed the emergence of the gig economy and pointless, bullshit jobs that serve no purpose other than to keep as many people as possible working 40 hours per week (or more). We must collectively bring this problem to the forefront and work together to find real solutions, so that the next wave of innovation makes life better for everyone, not worse.