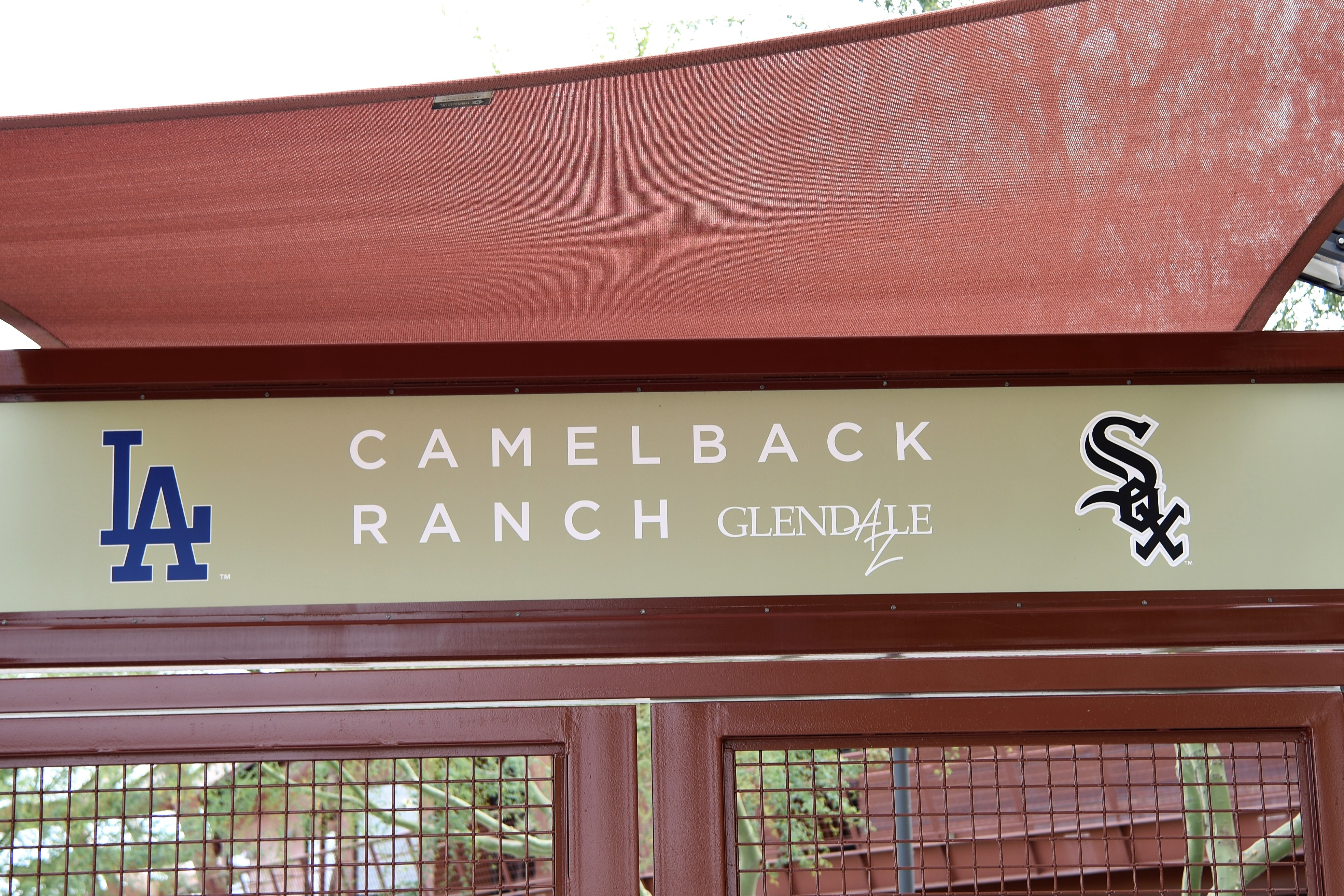 Posted at 16:47h in Columns by Expanded Roster
0 Likes
Share

The field is mowed, the dirt is groomed, the bubble gum vat is filled to the brim (until Rich Hill gets mad at himself for a bad inning and tosses it to the ground)… it’s official, baseball is back. The Dodgers left Camelback Ranch two weeks ago and wrapped up their spring training with the Freeway Series against their “cross-city” rivals, the Los Angeles Angels (of Anaheim, actually in Orange County). Obviously, Expanded Roster was there, and we’re bringing you our final impressions on the Dodgers’ spring, and what to expect for the upcoming season.

CATCHERS: The mitts (and bats) have aligned
GRADES: Mid-spring training: B; Final exam: A-

Oh, how a month can change everything. At the start of spring training, newly returned Dodger Russell Martin suffered a back injury, Austin Barnes was… being Austin Barnes, Rocky Gale was poised to be the main backup catcher, and Keibert Ruiz and Will Smith were showing extreme promise and long-term potential. Now, Martin has returned and showed he can be a solid designated hitter, Barnes stepped up into the number one catcher spot, and Smith, Gale, and Ruiz were all assigned to minor league camp.
Martin’s strength as a designated hitter will be vital for interleague play, as Dodger pitchers actually can hit and they won’t need to worry about the NL. He seamlessly fits into the lineup as an alternate catcher to Barnes, and even though he only appeared in 12 games due to that bad back, he had a solid line with seven hits, two home runs, and seven RBIs.

The real story is that Austin Barnes decided 2019 was the year his bat was going to get hot. His 2018 BA of .205 has greatly improved this spring training, finishing at .289 with 13 hits, two home runs, and an impressive 12 RBIs. His plate discipline also improved, with eight walks, tying the team for second-most walks.

Gale, Smith, Ruiz, and Josh Thole will all be in the minor-league system but expect Ruiz and Gale to appear at some point this season, as they have made the 40-man roster. Dodgers fans will see Smith and Thole in the future, even though they were non-roster invitees — Smith’s defensive skills are notable, and Thole finished spring training with a .389 BA, the highest of any catcher on the Dodgers. It’s interesting to note that while Gale and Ruiz are on the 40-man, Ruiz is actually not on Triple-A Oklahoma City’s roster, but on Double-A Tulsa’s, which says a lot about Dave Roberts’ faith in Ruiz’s journey with the Dodgers.

OUTFIELD: Welcome to the family, Alex Verdugo and A.J. Pollock!
GRADES: Mid-ST: B+; Final exam: A

Well, Alex Verdugo is in. His final line was solid with a .250 BA, and Doc Roberts announced March 22 Alex Verdugo got his opening day spot (which, this column predicted he would) on the 25-man roster. That makes for an extremely stacked outfield that features Joc Pederson, Cody Bellinger (who has fully moved into outfield from first base), Chris Taylor, and now, the Dodgers’ new dream team star, A.J. Pollock. During the cold off-season, many were wondering if the Pollock acquisition would be enough for the Dodgers, and yep, Pollock delivered. In 56 ABs, Pollock had a .286 BA with 10 runs, 16 hits, seven RBIs, and three home runs, and led the team in walks with nine.

The non-roster invitee highlight outfielders — Kyle Garlick, Ezequiel Carrera, Paulo Orlando, and Cameron Perkins — have all been assigned to Triple-A Oklahoma City, but expect to see these four on a Dodgers roster in the next few years. While they are diamonds in the rough, their batting averages were competitive (Perkins and Garlick, in particular, did better than some of the big names, with .280 and .267 BA respectively) and with a little polish, they’ll shine soon enough on the big stage.

INFIELD: Corey’s back, a new super-utility rises, and Mr. JT’s at it again
GRADES: Mid-ST: A-, Final exam: B

Corey’s back, guys! Corey Seager is officially back in the saddle again, and what a horse he decided to ride in on; on March 20, in his first game since April 29, 2018, Seager hit a home run, so he’s still got it! Roberts, while confident Seager will be able to deliver to his pro ball standards, is still cautiously optimistic and slow playing him. But Seager is, for now, playing like he didn’t just sit out an entire season to recover from two major surgeries.

Besides the return of everyone’s favorite Dodger giant (literally — he’s 6’4”), the infield slipped a bit. Max Muncy and David Freese, who weren’t even with the Dodgers at all at this time last year, saw a decline in their offensive lines through the end of spring training (Muncy with .206 BA, Freese a bit better at .286). However, it seems Muncy is getting back into the (no pun intended) swing of things, forming one half of a new back-to-back dream team with Pollock in the batting order, playing small ball and hitting doubles like they’re nothing. If Muncy continues this trajectory with Pollock in the lineup, this offense could be lethal. It does need to be noted that Muncy was charged with several errors in the last round of spring training games, and if he doesn’t shape up, he could be lethal in a very different way.
While Kiké Hernandez is still going to be a utility player, now that Seager is back at shortstop, according to Roberts, Hernandez will be the primary second baseman this season. He’ll obviously move around (and hopefully we’ll get to finally see him catch and fill our position bingo cards, #LetKikéCatch), but Roberts has said Chris Taylor will be the Dodgers’ primary utility man for the season.

CT3 had a rough go this spring training, but he did hit two home runs, so hopefully, Taylor will find his footing again now that the season has officially started. And based on the ridiculous catches and plays he made in the 2018 postseason, he’ll be fine wherever Doc throws him.
Out of the NRIs, Matt Beaty has made the 40-man roster, and will still be with Triple-A OKC along with fellow spring standouts Edwin Rios and Daniel Castro, but the headline is Omar Estevez, who finished his spring training with one of the best lines among the Dodgers — a BA/OBP/SLG/OPS of .296/.321/.593/.914, two home runs, and four RBIs in 14 games played. Only Justin Turner had a better OPS in players that played more than 10 games. The best thing about Estevez? He’s not with Triple-A or Double-A, he’s with the Advanced-A Rancho Cucamonga Quakes. If Roberts was taking notes, Estevez will be climbing that farm team ladder faster than we all think and could be a real star in a few years. Speaking of Turner, he finished the spring with a batting average of .457, so we don’t need to worry about him unless he gets injured because, well, he’s Justin Turner.

PITCHING: Help, we need somebody (in the bullpen), literally anybody
Grades: Mid-ST: B-; Final exam: C (only with extra credit)
The bullpen still needs work — a lot of work. The roster right now is plagued with injuries; Clayton Kershaw, for the first time in nine years, did not pitch opening day due to the sore shoulder issue plaguing him since the start of spring training. However, he has improved to throwing bullpen and sim games. Rich Hill suffered a strained knee and there is no timetable for his return. Tony Cingrani’s shoulder injury from last season flared up and he’s out for the time being. Walker Buehler, also plagued with shoulder issues, was slow played by Roberts and pitched one game all spring training. And of course, who can forget this headline: “Joe Kelly sits out weekend games due to sore back from cooking a five-hour crawfish boil for team dinner” from earlier this spring?

The Dodgers are betting on Hyun-Jin Ryu to open against the Diamondbacks, followed by Ross Stripling, Kenta Maeda, and Buehler in the starting rotation. While Stripling and Maeda are smart choices — both are used to going from starting to relieving — many are wondering why Julio Urias has not been given a starting slot. In his last tune-up start on March 26, Urias threw four perfect innings and had an impeccable spring training, showing The Teenager can handle being a starter.

Now, the bullpen. In good news, Kelly has started to get in gear and give the Dodgers some of that juice that got him a ring with the Red Sox JT Chargois has been sent back to Triple-A OKC after a spring training that showed less than stellar results, but is still on the 40-man. Pedro Baez, Scott Alexander, and Dylan Floro actually had a positive spring training, Yimi García had a great spring, and Kenley Jansen’s velocity is back up.

Here’s the bad news: every reliever has been extremely inconsistent, and Caleb Ferguson had the worst spring training of the entire 25-man Dodgers roster with a 9.35 ERA, and never improved. It seems that the Dodgers bullpen is still having a major uphill battle to climb, but Brock Stewart was called back up from minor-league camp to join the 40-man roster and fill the 25th slot because Andrew Toles is no longer on the active roster, so time will tell if the fresh blood helps.

NRIs Dustin May, Tony Gonsolin, and Kevin Quackenbush have all been on Roberts’ wish list, but during a press conference, he stressed that they aren’t fully ready yet. Gonsolin is closest, but Roberts also said he will keep an eye on him.

Here’s the thing: the Dodgers’ bats came alive this spring with several high-scoring games, which should be promising against offense-heavy teams with big-name hitters. Pitching is going to be the big issue, but if the veterans can heal from injury quickly and stay healthy, and relievers fix their issues, the battle may not be as intense. Time will tell, but if the Dodgers want to make another postseason appearance, they’re going to have to put in elbow grease, and fix careless errors and inconsistent pitching.

Here’s to the 2019 season. It’s time for Dodger baseball.